Marc
I like operetta. I like researching old shows and hearing new music. Other than that, I'm not sure what I do. As for Discovery, I guess I'm sort of a provocateur or executive producer or cranky old fart and sometime performer. Depends on who you ask and when you ask them.

A full year after our staged concert production closed, the Florodora cast from 2009 re-united for a narrated program of highlights at the San Francisco Theater Festival on August 8th, 2010. Cast members enthusiastically reprised their roles and sung a progam including parts of the opening chorus and act one finale, Somebody, Phrenology, Shade of the Palm, Tact, Millionaire, Land of my Home, Tell Me Pretty Maiden (of course) and Queen of the Philippine Islands.

The beautiful "lost" Florodora score played to appreciative San Francisco audiences for and was greeted with applause by the theater festival attendees in the large 396 seat Forum venue. The cast really likes this show and a good time was had by all. Again.
Posted by Marc at 3:43 PM 1 comment:

Last night, August 1st, 2009, for the first time in who-knows-how-long, a full cast of performers acted through all of Florodora's scenes and songs and hilarious dialog with Lyric Theatre's great sounding salon orchestra to a very enthusiastic sold-out house. Florodora returned to the stage and radiantly shined.
A year ago I'd have given odds of 10-1 against this ever happening. But it really happened.
Posted by Marc at 9:13 AM No comments:

On Saturday Aug 1st, our Florodora revival was listed in the San Jose Mercury News as one of "Three Things To Do Tomorrow". By the time the issue went to press, we had already sold out our Sunday August 2nd performance!
Posted by Marc at 9:11 AM 1 comment:

A Show For Any G&S Group

The performing edition of Florodora which we have created, with its new vocal score, revised performing edition libretto, midi practice files and band parts would be a perfect fit for the repertoire of any G&S performing group.
Posted by Marc at 9:05 AM 1 comment:

Our short run of Florodora has sold out! Interest is very high and the buzz around the show is simply amazing.
Posted by Marc at 9:03 AM 1 comment:

Down To The Wire

An intense week for run throughs of Florodora but the result is a great sounding, funny show. The cast has found their characters and the fun, silly character of the Florodora. The orchestra and the new orchestrations sound great and we have been working on lights and other production elements. I've been very very lucky to get such a great cast and orchestra and crew.
People genuinely seem to like Florodora. It is understandable - it was written to be a very popular, appealing, mass-market show with, to mis-quote Anthony Tweedlepunch, "bumps of operetta, music hall and variety that stand out like watermelons". Whats not to like?
Both shows are approaching sold out houses. The buzz is very good. Light the lights! Here comes Florodora.
(I honestly don't know what I'm going to do with myself next week. Oh, yeah, that "day job"...)
Posted by Marc at 8:51 AM No comments: 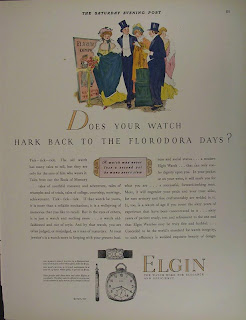 Today is the Florodora sitzprobe. Cast meets orchestra for the first time in our production and I daresay in any production of Florodora for a while. The show is sounding and looking wonderful and I know it will be a lot of fun for both the cast and the audience come (gulp) next Saturday at the Mountain View Center.
It's Florodora days once more!
At right is a 1927 advert for Elgin watches. I guess these days my watch does harken me back for Florodora. Almost daily.
Posted by Marc at 7:34 AM No comments: 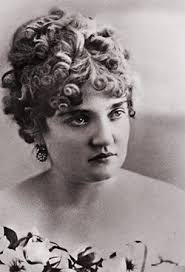 Michael Crozier, our Cyrus Gilfain in Lyric Theatre's upcoming Florodora is also involved with Berkeley Opera's production of Douglas Moore's The Ballad of Baby Doe. According to this website of "Opera Performances in Old Colorado"
(http://operapronto.home.comcast.net/~operapronto/performances.pt2.html)
Florodora played at the Tabor Opera House in Leadville, Colorado on Jun 24th 1907.

This was 8 years after Horace Tabor died, but Baby Doe was still alive and, I presume, living at the Matchless Mine. I'm guessing that she was probably too distressed by 1907 to see this production of Florodora, but you never know.....

Florodora is like the Kevin Bacon of musical comedies, with more music history connections than even Cellier's Dorothy.
Posted by Marc at 12:06 PM No comments:
Older Posts Home
Subscribe to: Posts (Atom)